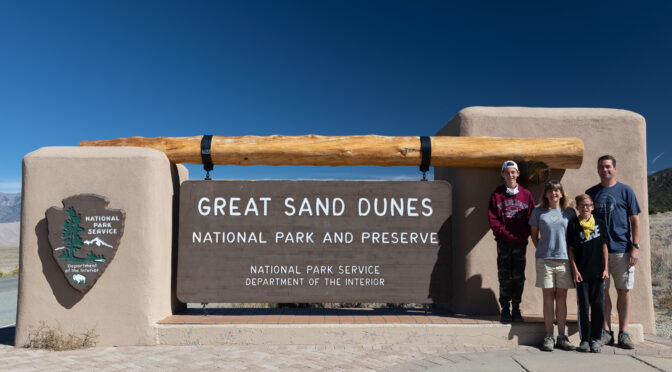 After a few days stomping around a few of the parks in eastern Utah, we crossed back into Colorado to see a couple of the closer-to-home attractions that we just hadn’t found time for. The first stop was Black Canyon of the Gunnison, followed by Great Sand Dunes. These two parks make the 8th and 9th national parks we’ve visited this year. We figure that’s not too bad for a family with school-aged kids!

Day 5 – Black Canyon of the Gunnison

We spent Wednesday night at a hotel in Montrose, CO to be close to the entrance to the park, and headed over first thing in the morning. It was much cooler here than at the lower elevations in Utah, but still a very pleasant day. We started with a bit of orientation, driving along the south rim and visiting a few of the overlooks into the canyon. It really is quite impressive. My photography skills simply don’t do it justice given the significant differences in lighting from sunlight to shadow in such a deep, narrow gorge.

We hiked on the short Warner Point Nature Trail at the far end of the road to a nice viewpoint looking back east into the canyon. After a quick stop for another picnic lunch at Sunset Point (yes, every park must have one), we drove back to the visitor center to hike the Oak Flat Trail, which took us down into the canyon about 400 feet.

Since this was our fourth consecutive hiking day, the boys had had about enough at this point, so we decided to go easy. We drove down into the canyon on East Portal Road (about a 2000′ descent) to check out the Gunnison River and Crystal Dam. The road itself is a trip. It’s about 5 miles of 16% grade. The guy behind us rode his brakes the hole way down. We could smell them burning up from our car!

After the climb back up to the canyon rim, it was time to head into Gunnison for dinner and get ready for the next adventure.

Friday was our last day of the trip. We were all getting pretty tired, both from the physical exhaustion of numerous hikes and car rides, as well as of trying to dine safely under COVID restrictions. We left Gunnison early to head for the Great Sand Dunes. We’ve been trying to make it to this park for a few years, but something would always get in the way. Not this time!

We first hiked out into the dune field from the main parking area. Once again, the place was surprisingly packed for an October week day. Fortunately, we found a parking spot in the lot and grabbed another picnic lunch before heading into the sand, a roughly half mile hike through soft sand before reaching the first line of dunes.

Since this was at the back end of a week long road trip, we did not bother dragging our sleds with us as we had originally planned. It was lucky we didn’t, because we learned once we got there that the plastic sleds don’t work in the sand (despite rumors to the contrary). We came across a woman walking out with a rented wooden sled. She was kind enough to let the boys take a few rides down the slope. As you can see in the pictures, they had a great time!

We walked a bit up one of the dunes, though not to the top. We were all ready for an easier day. We just did one more short hike around a nature trail for a “non-dune” aspect to the park, and drove up the 4WD road to the “point of no return”, where you have to air down your tires to drive out onto the sand.

That does it for our 2020 Fall Break. We’re glad to be back home, but we’re already starting to consider what Spring Break might look like!